There is a way that you can win, and it’s by losing. But not losing alone, it’s also knowing how to handle the loss.

What to do with it. Through which lens to dissect it. There is a certain perspective and a certain point of view someone can train themselves to have.

This is coming from Jay-Z, a man with serious skin in the game, as both a lyrical artist and entrepreneur. But to appreciate loss isn’t a flip you switch, it’s almost a training – a muscle. It needs to be used or it will be lost. Make it a habit to look at losses and see what opportunities come from it, and when too many wins start stacking up you should be a little worried. Focus more on the downside and the upside take care of itself.

Nobody ever went broke limiting their downside.

So in this weird way learning how to lose and how to manage the loss is a pretty solid strategy for how to win, and there are far fewer people using this strategy. There is an edge here. Because those who focus solely on “winning” and trying to optimize for the upside tend to forget about the potential of the downside, and when that downside comes – which it will – it’s as unforgiving as anything ever. The majority wants to go about winning in the same way, which is getting off the starting line first. And yes, everyone wants to win. But when everyone is rushing for the same objective at full steam, that can end up being a deadly collision of the masses, which we want no part of. I don’t know about you but I am not here to fight or race, and I don’t really care to compete at that sort of level.

There is one trick to learning how to lose though – gratitude.

Once you can see gain and misfortune through that lens of gratitude it will open up even more doors for you and make loss not sting as much.

Now, winning by losing is paradoxical and counterintuitive to me. And something it took me some time to get until I saw this book cover. 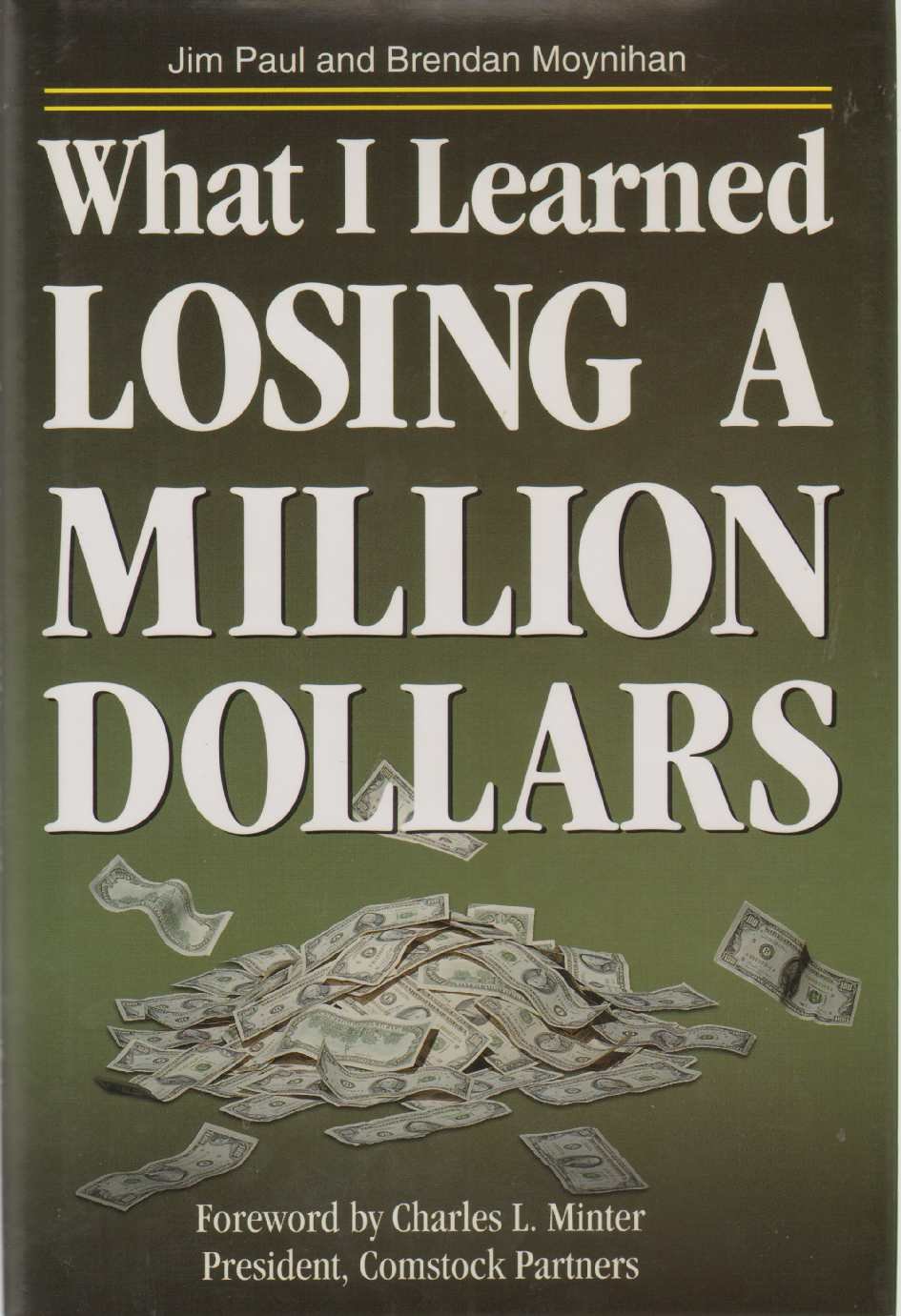 This dude lost 1 million dollars. And spun it into a popular book, talk about a sweet combination of creativity and gratitude. This process of combining the two is exactly what Jay-Z means when he talks about appreciating the pain, he’s talking about gratitude. And that’s what it takes.

When you get online it seems like there are a lot of winners. What I mean by winners in this case is, a lot of geniuses, a lot who seem to understand every theory, every piece of code & every financial trick. Phd’s. CFA level trillion.

I am not these things, I likely never will be, but for those of us who aren’t on this list, we need our losses. We need to use them. They cannot be wasted. They are the only thing that differentiates us from the pack. These losses are specifically customized to you. Job loss, money lost, time lost, are all assets. In fact you should be worrisome if you didn’t have any losses, because that can only mean they are coming.

These losses can be used by not optimizing for winning and winning only. Optimizing for winning makes you particularly susceptible to anything other than winning, and when you aren’t winning you will be completely helpless. Optimize for loss, so when loss comes you can handle it. Don’t let winning or losing interfere with the gratitude you need to have. There will come a time when those who have adapted for winning only take a loss for what will seem like the first time in their lives, and it will break them to the point beyond repair.

Gratitude gives you the optionality to make lemons out of lemonade. Ingratitude makes this optionality impossible.

Hedge your accomplishments by failing often.

In our modern world “accomplishment” and “failure” are seen as two opposites, you either accomplish, or you fail. And that you have one, without having any of the other. But the two are more inexorably tied than I’ve been led to believe. They are more like the north and South Pole, yes, opposites, but interconnected in a way that one could not exist without the other. .

So get this, I’m on academic probation from my local community college (please reach out to shame me) because I’m no good at any of that, and I actually feel pretty good about it. And ironically, being this much of a mismatch in the modern world is overwhelming because you do have so many options, since being a “failure” makes you antifragile. I am grateful for my not-fitting-in. I mean after all, I’ve got nothing to lose! No reputation, no education (really). So for me at least there are all these different directions I could go, the overwhelming part is picking one. And I’m no math wiz, I’m no coder, the most intellectual thing I ever did was skateboard, play basketball, and listen to rap music.

One of my only intellectual accomplishments is having read some books I probably wasn’t supposed to read (because my professors wouldn’t have approved), but those books ended up doing more for me than anything else could have and have helped me figure out a path better than any mentor I have ever had.

In my hopelessness, I find great hope.

With that said, here is some of what I have gotten from the books I should not have read: You win in your own way: by taking off from a different starting point as everyone else, and starting at a different time than everyone else.

Abraham Lincoln knew this; “Give me six hours to chop down a tree and I will spend the first four sharpening the ax.”

So you don’t actually have to be literally chopping at a tree to chop down a tree, there are other things you can do to lighten the load for when you actually get to chopping.

“That roundabout methods lead to greater results than direct methods is one of the most important and fundamental propositions in the whole theory of production.” Böhm-Bawerk

In my estimation a good “roundabout method” that leads to greater results is taking your losses (that you have managed to not let ruin you completely) and spinning them with gratitude and creativity.

In order to spin your losses there comes a time when you need to do some emotional heavy lifting to tap into an attitude of savagery and disregard your failures. Don’t take them so seriously. Not that they are useless, they aren’t. But just don’t dwell. Dwelling and pouting over failures and shortcomings will only unnecessarily multiply the damage. Gratitude reverses the loss.

At the same time there are also failures you won’t know what to do with. For me it’s my whole academic probation thing I mentioned. I have no idea what I am supposed to do with that kind of failure, I am trying to be creative with it. While I occasionally have my moments, I try not to pout about it you have to be your own cheerleader and remind yourself to “snub your failures”.

With everyone seeking to be the biggest, and the first, and willing to do anything to get the finish line quickest, this is where your advantage is – by everyone else’s delusion in chasing the same thing with all the same strategy. So for those of us who are slow adopters and not the quickest off the starting line, what’s there to do?

Wait. Learn to wait. Wait to learn. Sacrifice being first, sacrifice being bigger in order to gain a later advantage no one (including yourself) sees yet. Being first, being the biggest, and winning, are all scarce resources that everyone is vying for. So pivot. Sit back. Study. Learn how to be creative with loss. Sharpen the axe & follow your curiosity.

Cut your losses. Don’t chase the train you already missed. While waiting for the next train, use that time to sharpen your axe for the next move. That’s it. I live in a generation of too many people who are way too hard on themselves.

I will continue to mumble to myself that patience is key.

We are hardwired for this. It’s all good.

“Come now, be a man! We are used to adversity; let’s not be crushed by a mere disappointment, or else I shall have suffered for nothing. The heart breaks when it has swelled too much in the warm breath of hope, then finds itself enclosed in cold reality.” – The Count of Monte Cristo

One thought on “Sharpening The Axe”